This is one article of a general series about appreciating Classic WoW throughout the leveling process while still making progress in the game with limited playtime. Read more about the series here.

As described in the first post of this mini-series, what I call passive roleplay is markedly different than what a lot of people view as RP. When you passively RP, you are not actively portraying your character’s thoughts, desires, or actions. Instead, the passive RP is a framework of motivations for what you do in game.

Why do we care? Passive RP can help attain that all important immersion that can help make Classic WoW more exciting, even in the more “boring” activities such as grinding or leveling. Think of it like this, instead of just going for the “cookie cutter” leveling experience, passive RP adds another layer of fantasy and wonder to the game. This greatly compliments questing slowly, which I will describe below.

Important: Passive RP requires very little, if any, playtime. This means you won’t be sacrificing leveling speed for the benefits of passive RP alone.

How To Passively Roleplay: Race/Class Selection

I could talk about race/class/faction selection forever, as far as roleplay and immersion go it’s critically important. Without going off on a 2000 word tangent, here are some general guidelines I would use. 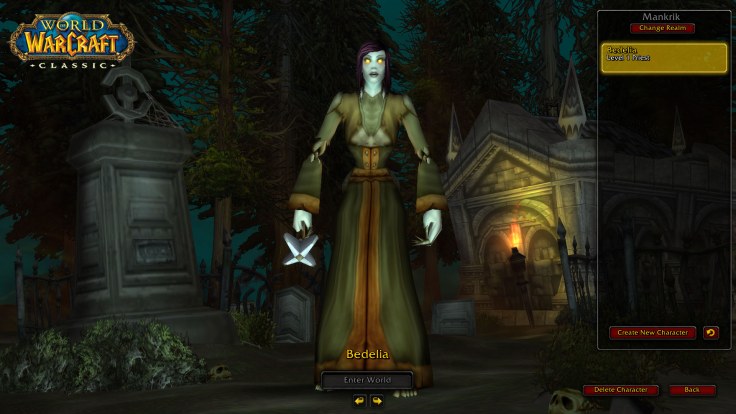 Faction choice is a lot more than Shaman versus Paladin. You’ll be spending time in the capital cities, in the zones, doing the quests and grinding reputation with the various groups of that faction. From a passive RP perspective it is important to “feel” the faction, which means your personality aligns with that faction somewhat. Do you sympathize with the misunderstood underdogs, or the blinding light of the moral gray area that is the alliance? (Can you tell which I prefer?).

I cannot stress this enough, play a class that is interesting to you. Leveling in Classic WoW takes forever, so re-rolling is painful and sad. Something to remember is the following. A huge part of Immersion in Classic WoW is related to your race and class combination. If you’re unsure the Countdown To Classic podcast recently featured a psychologist who related class choice to the Enneagram personality test, which is far from perfect but might give you a guiding direction for class choice.

Character selection really drives the rest of your roleplay, so I hope you’re happy with it! Passive RP is a powerful immersion tool at your disposal, and can be integrated into many areas of gameplay. Just remember, this is not the same as running nude around Goldshire or speaking in character.

A really huge part of immersion in classic WoW is where your character is, and what they’re doing. I actually talked about this in the questing sequence already, where choosing to quest in lore-appropriate zones leads to a deeper sense of immersion. Here’s how to take a little more passive RP into it.

Motivate zone choice: I gave an example of a natural progression of early zones for a

Forsaken character in this questing article and motivated those choices based off of quest lore. However on Horde, it is generally more effective to quest in The Barrens if you want to level quickly. Seeing a Forsaken priest in The Barrens is sort of like seeing a tiny Danish girl at an American 4th of July party. You’re not sure why or how she got there, she clearly doesn’t belong, and everyone is staring at her.

Specs in WoW Classic are actually interesting, unlike what retail has become (oh burn!) and are one of the hottest topics to argue about on forums and discord. Leveling in Classic WoW will be slow, and difficult; choosing an effective spec for your play type is paramount. Too often though people get stuck in this loop:

“Wand Spec/Spirit Tap and respec Shadow at 40 to profit”

The above is what 95% of people will tell you about priest leveling, as if putting points unto Discipline early on, then respec-ing to Shadow at level 40 (for Shadowform) is the only way that exists to level a priest. Does this really feel like a priest to you? Maybe! Deep in my heart I know I am personally a healing priest, as in the class is a healing class to me. Shadow spec is uninteresting, unappealing and conflicts with my ideas about this character.

Going back to my example of a Danish girl attending an American 4th Of July party,  doesn’t it strike you as odd for an Forsaken Warrior to take up tailoring? A Troll Priest who dabbles in blacksmithing? Of course we are free to choose whatever professions we want in WoW Classic, and there are solid PvE and PvP benefits for certain class/profession combinations. From the standpoint of passive RP, these choices can be motivated for greater immersion.

NOTE: Fishing and cooking are amazing professions to steep yourself in world immersion. Azeroth will feel all that much more alive if you take some time to cook some supper!

There really is too much to say about passive RP. By asking yourself “Why would my character do this?” you’re already diving deeper into world immersion. By no means do you have to motivate each and every choice you make in game, but having a general idea of who your character is can lead to a sense of connection to that character and the world around them.